In recent months, Little Fatty ﻿often has problem of focus or short attention span. Usually, I remind him, "hi, you are out of mind again, please focus on what you are doing!"  However, this type of reminder, sounds serious but gets more and more ineffective. With time being, both Little Fatty and I get frustrated. After several times, we invented together a game called "Monster of Distraction", which helps Little Fatty realize that he is distracted and should get back to his task.

We were at dining table, Little Fatty almost finished his plat, probably not hungry anymore as usual at this moment, he became a bit fuzzy, started to play a bit with food, with table cloth, or bounce back and forth. Though becoming more and more anxious, I needed to control my temper to avoid being an ugly yelling mum. I forced myself calm down and work out a bit playful and witty plan.

Suddenly, I got some inspiration, decided to create a role play game with Little Fatty. I slowly spoke aloud my new title “分心小怪兽”/ Monster of Distraction, miming the voice of a monster, saying " I knew you would not finish your plat, I knew that you would not grow stronger and taller, ahhah, I knew your little brother would take the lead......" Little Fatty was astonished at first, turned back then to his plat. He obviously knew it is a game, but an attractive game. To stimulate me to play again the Monster, he intentionally stopped eating. I pretended that the Monster was approaching to him, he then immediately picked up the chopsticks and triumphantly stuffed a large piece of beef into his mouth! I then performed that the Monster of Distraction was defeated and escaped in panic. I guess I was really into the role that I scared his little brother in tears.

We repeated this game several times. Sometimes, he was just observing my reaction or purely enjoying the fun without eating food. I then needed to close my eyes, left him some time and space to react. Indeed, when I opened my eyes, he did finish a big mouthful of the left food in his plat. I would reperform the defeated monster. During the role play game, Little Fatty liked to request us to close our eyes, enjoying to see our surprised reaction when we reopened eyes. This process is also verified and proposed in the book of Playful Parenting by Dr. L. Cohen. It's said that parents should leave some space for kids to perform and enjoy the surprised expression of their parents. 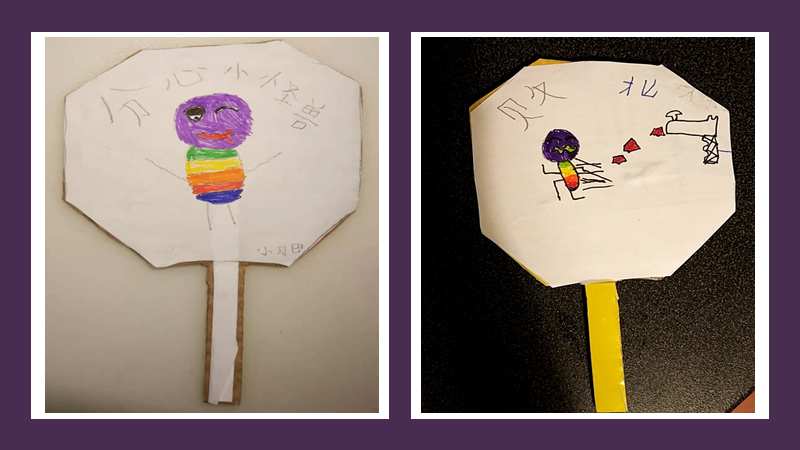 Little Fatty's creation: he cut a form of Yellow warning card and drew on both sides. On the front side of card, he drew a Monster of Distraction and wrote title in Chinese; on the reverse side,  there is a defeated Monster of Distraction on the run. What surprised me a lot is he wrote down "败北"/ defeated, a quite formal literary  expression that we learnt sometimes ago.  Little Fatty declared that Mum and Daddy now have a new tool, a yellow warning card,  to use in near future whenever he is out of mind.

Simple like this, urging Little Fatty to eat correctly becomes easy and fun. We all enjoyed the bonding through out this role play game.  Little Fatty, in no more than 3 minutes, finished his plat and claimed his winner title! Usually, the preparation before bed time is also fuzzy and time-consuming because he is often being distracted, such as by a book on the way to bathroom.......now I only need to say Monster of Distraction is coming, sometimes, my words were not yet finished, Little Fatty would run to complete his task.

At the end of day, I wrote down in my parenting journal: to accompany Little Fatty grow up means to help him build up confidence in self-management. And, I accomplised it today. 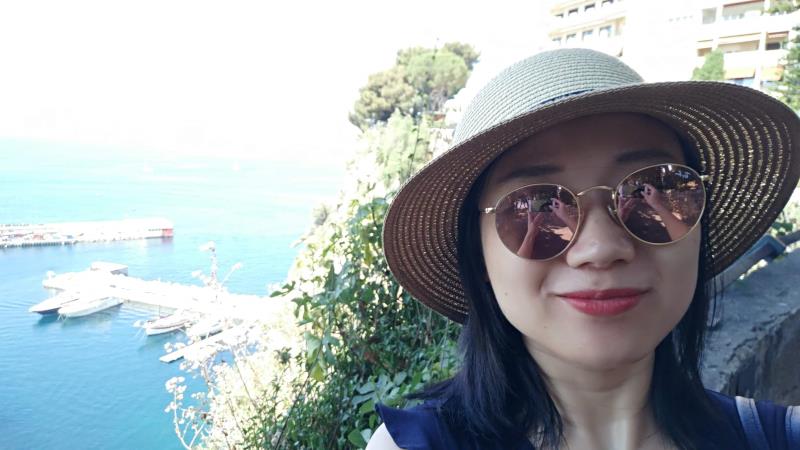 Hongxia Fu
Hongxia, mother of Florentin and Marius, holds Master Degree in French Literature and Culture at the University of Xiamen (China) and at the University of Lyon 3, and Master Degree of Entrepreneurship at EM Lyon Business School. Having been a professor of French language at the Dalian University of Foreign Languages, Tianjin University of Foreign Languages, and at Alliance Française in Tianjin from 2009 to 2012. Mrs. Fu continues her life and career in Lyon in France, in the language and cross-cultural education, as well as in operation of Sino-French commercial and cultural projects. Fascinated by the reciprocal development of children and their parents in a good parenting relationship, she devotes herself in the research and best practice of early childhood language development and the management of time and priority. "It's my honour to be invited by hihilulu, an excellent platform in the initiation of the Chinese language in young children, to share, through the journals I have been writing since 2014, the joys and success, frustration and relief. I would lke to communicate, share my experiences with parents like me, who not only want to support and guide children in learning Chinese language, but also in building good attitudes and healthy habits that will be essential and beneficial to throughout their life. "
Follow