Categories: How to Use hihilulu

Theme-based Learning is a very popular and efficient method for young children’s issue-centered learning. But it could be very challenging to educators. By using hihilulu contents platform and its Online Progressive Chinese Learning System, Les Petits Trilingues (LPT) created a journey of learning Chinese with cartoons in its Chinese curriculum.

LPT summer Chinese class aims to create a fun and productive Chinese immersion class for kids during the two months summer vacation.  Based on the seasonal features, hihilulu suggested using the cartoon series “Mouk” to create a  curriculum of cultural geography topic. The main characters of this TV series are Mouk and Chavapa, two globetrotters cycling around the world. From Ouagadougou to New York, from Australia to Madagascar and Greece, the two buddies discover the world and its inhabitants. This cartoon does not only help kids discover breathtaking landscapes, unknown traditions or foreign worlds, but also cultivates an attitude of appreciating difference. Both LPT teachers and hihilulu team explored all potentials of multimedia materials on hihilulu platform and created an interesting model of learning Chinese via Chinese cartoon.

What does a rich multimedia curriculum bring in the Chinese classroom?

One typic day of Chinese immersion class at LPT summer camp is basically composed of 5 steps:

Mouk is wonderfully made to achieve this goal. Each episode begins with Mouk chatting via webcam to their friends back home in France and then telling his adventure of traveling on a bicycle in a new country.

Each day of the every 20-day summer Chinese camp, LPT students would start their daily voyage by watching an episode of Mouk in Chinese version. After watching Mouk’s story in a foreign country, children were asked to talk about what information they got from Mouk’s story. Through highly engaged discussion and Q & A, the teacher introduced in theme-related Chinese characters of the day, and explained new words or expressions connecting to the scenario in the episode watched. After these three steps, hihilulu online interactive games of writing and memory cards, as well as the printable coloring and writing sheets of Chinese characters were used to more in-depth learning of these keywords. The activities would be arranged around the theme of the episode watched, either about a country or about the local traditions Mouk had discovered. Children participated in the activities in order to further understand information Mouk transferred in his story. At the end of the day, children were happy to re-watch the same episode again, with, of course, new understanding and appreciation. 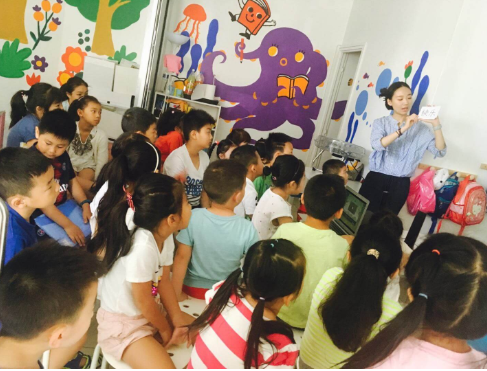 What are positive results of an online-offline blended class?

After the summer camp, LPT and hihilulu team sit down together to line out the following observations:

--- Using multimedia contents largely enhances children's sensitivity to Chinese pronunciation. The method of using cartoons, music-video, interactive games, which is commonly known as engaging children's ears for a foreign language, also stimulates children's interest in learning. It was observed that children tried to imitate how cartoon characters speak Chinese and they tended to use similar vocabularies in summarizing the story;

--- Using same Chinese contents can serve various teaching goals. For children at different age groups or different language levels, Mouk animations help children to practice different aspects of Chinese language skills. For children at lower grades, cartoons are particularly attractive. After watching the animation, younger children were extremely self-motivated to imitate the sound and tones.  They participated more actively in the Q&A than usual, and more carefully read and repeat the dialogues appeared in the cartoon.  The middle-aged children can understand most part of the story. After learning new words, they tended to describe the storyline and used new vocabularies to rephrase the story, which largely enhanced their capability of conversing and expressing in more literary Chinese words.

--- Using multimedia contents in a well-designed curriculum will not only extend kids’ attention span but increase their interests in self-led learning. Kids love cartoons, especially young children who can repeatedly watch the same cartoon over and over. And, amazingly, Children are remarkably visual literate no matter in which language the cartoon is. Fully understand children’s learning habits, the team member of this Project tried to avoid traditional subject area teaching but turning passive listening of a cartoon into an active, engaging issue-centered learning. It was not simply watching cartoons!!! The teacher sits alongside the children, sharing her understanding about Mouk’s adventure, highlighting new words and phrases, and interacting with kids by Q&A about their own traveling experience….in such a vivid Chinese language environment, kids naturally and actively used new Chinese words and expressions to have dialogue exchange. While the teacher brought out hihilulu working sheets, nobody was resisting it! Because it was all about Mouk, about their experience of traveling in summer vacation!

---Using quality multimedia contents to create a good quantity of inputs is the way to create a “language environment”. Learning is a process that requires constant repetition and memory. Though only 20 episodes of Mouk were used, all those Mouk stories have similar synopsis and strictly written for premium kids TV channels. Many expressions and topics repetitively appear in each episode for edutainment purposes and help children not only learning Chinese but strengthening their cultural awareness. In addition, hihilulu’s extended gamification exercises add a cherry on top: children can practice theme-related Chinese in and outside of the classroom. With those blended materials, the Project created a virtual Chinese language environment.

The results of the collaborative experiment are very encouraging and lead hihilulu to move on to create more engaging curriculum based on Chinese cartoons, and more fun Chinese workshops for the young Chinese learners.